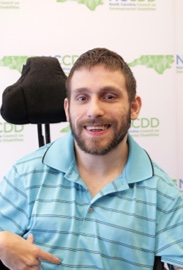 Guest post by Bryan Dooley, Chair of the DRNC Board of Directors.

Maybe I’m strange for my age, or perhaps it’s because I have a background in history, but I’ve always been excited during election season. No matter who’s running, there always seems to be a surprise. There was a particularly big surprise in the mountain region of North Carolina during this past election when representative-elect Madison Cawthorn was chosen to represent the 11th district for NC. What’s different about representative-elect Cawthorn is that he has been using a wheelchair ever since he was in an automobile accident as a teenager. Ordinarily, I would be cheering for an election result like this. People with disabilities represent about 20% of the United States’ total population, so we need more representation in elected offices on both sides of the aisle. But with all due respect to Mr. Cawthorn, I worry about his ability to represent the disability community, especially in my own state.

Strangely for a person who is partially paralyzed, he rejects when someone labels his disability as such. Instead, he lies to himself and others, claiming that he overcame it. Let me be clear about this: there is no way to overcome a disability like his. Although people are working on it, they haven’t found a way to cure paralysis or many other types of disabilities like I have. The notion of overcoming disability puts a ton of pressure on other folks like him and me. I know this personally since I can’t do a lot of physical movements without help.

I used to try and compensate in school by trying to make the best grades to show people that I could do everything they could intellectually. If you look through my transcripts, you will see that I didn’t make my first B until college. The problem of putting that amount of pressure on yourself to be perfect is that you become unhealthy very quickly. I found myself in a deep crisis and had to go to weekly counseling for a year and a half to work through my perfectionist tendencies. Through all of that, I won many awards for my academic achievements and graduated from Guilford College, summa cum laude.

Let’s contrast my record with that of Mr. Cawthorn. He didn’t finish college and dropped out from what I’ve read, claiming his poor performance was due to his accident. This terrible excuse played into a stereotype that people with disabilities always have trouble in school. It might harm what I’ll admit is an already low graduation rate of 65.5% for those with disabilities (according to the National Center for Education Statistics). My issues with him don’t stop with education. His behavior doesn’t make much sense to me, as he claims not to have a disability, but he uses it when it benefits him. One point would be that during a lot of his political rallies, including the Republican National Convention, he makes it a point to lift himself out of his wheelchair (with the assistance of multiple aids) while referring to being able to stand for Americans.

Mr. Cawthorn didn’t invent the trick of having a disability without using a wheelchair to convey a political point. President Franklin Delano Roosevelt caught polio but always took a great deal of care to downplay its severity to the American people by trying to appear in public without his chair. I would hope that after the passing of the Americans with Disabilities Act over 30 years ago, we would not have to hide a part of our experience just to run for office.

Representative-elect Cawthorn has also shown his ignorance of the disability community and its history by exhibiting an affinity towards Nazi culture by posing for a “bucket list” picture in front of a Germany vacation home of Hitler’s and referring to him as the Fuhrer. Before Hitler went after the Jews, he started by euthanizing people with disabilities, a group he would consider as a lower form of human life. The program in which over 275,000 innocent lives were cut short in psychiatric hospitals was called Aktion T4. I firmly believe that I would have been a victim of Hitler’s program had I lived during that time, and I’m not sure if Mr. Cawthorn would have been considered worthy of staying alive either.

I usually don’t make it a practice to criticize people’s choice of words because, in America, we do have free speech. If Mr. Cawthorn wants to call himself “wheelchair-bound,” that’s up to him. I want to point out there are other ways to envision wheelchairs and their use. I prefer the term “wheelchair user” because it’s more accurate. My wheelchair is a tool that helps me get around, but I wouldn’t say I’m bound to it. It frees me to venture out to places and enjoy the activities that make me happy.

The disability community is genuinely one of the most diverse and welcoming communities on this planet and includes individuals from all walks of life, political creeds, orientation, class, color, etc. I invite Mr. Cawthorn to learn more about this community and develop a better understanding and appreciation of us. By including us and lifting us up, he may have a shot to become a leader in this rich community. But more importantly, he can use his visibility and position to shape policy and law to improve the lives of people with disabilities.