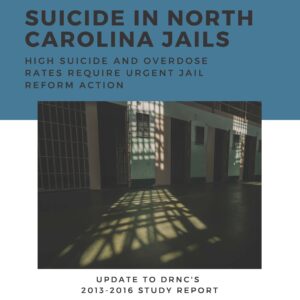 “As the data shows, suicide levels in NC jails have not improved since DRNC’s earlier report, and total jail deaths and overdoses continue to rise at an alarming rate.” writes Susan Pollitt, DRNC supervising attorney and leading advocate in the area of disabilities and incarceration. Commenting on the report, Pollitt stated “North Carolina is in a desperate situation regarding a severe deficiency in jail medical care, funding, and regulation that would ensure a minimum level of care for people in NC jails. The attention of the State Legislature, County Commissions, and Sheriffs must be focused on creating safer jails”.

DRNC staff examined death reports, medical examiner reports, autopsies, and NC Division of Health Service Regulation reports as well as newspaper articles and other media interviews in order to procure data on the number of suicides and overdoses occurring in jails across the state. DRNC found that jail suicide rates in North Carolina far exceed suicide rates among state and national populations, and that jail deaths by overdose nearly tripled between 2017 and 2018.

The report, which in addition to statistical data, details the results of several civil suits as well as personal stories of suicide.

“Being arrested and jailed in North Carolina carries with it an unacceptably high risk of death or serious injury.” writes DRNC attorney Luke Woollard, co-author of the report. “DRNC advocates for the implementation of active suicide prevention programs and more robust implementation of specific jails rules to improve intake screening and policies regarding observational rounds.”

A number of local law enforcement agencies have recognized the dire need for mental health and substance use disorder services in local detention centers and have made efforts to improve mental health services in their jails. Statewide action is imperative.