Developing brains are particularly vulnerable to this barbaric practice

Disability Rights North Carolina (DRNC) exposed the unacceptable racial disparities in NC’s use of solitary confinement, and explained how solitary confinement is actually torture, in our first and second installments in this series. DRNC is calling on the state to enact recommendations from the 2020 NC Task Force for Racial Equity in Criminal Justice that would limit solitary confinement to 15 consecutive days and only for “exceptional cases as a last resort.”

Now, DRNC examines the use of solitary for incarcerated people who are 18 to 21-years-old, a period the scientific community widely recognizes as a time when the brain is still in development.

When NC places people ages 18 to 21 in solitary confinement, it is especially psychologically damaging because the brain is still developing. The harmful consequences are lifelong. Recognizing this, the Task Force recommended that NC stop the use of solitary altogether for youth 18 to 21. The Task Force is right – we must end the use of solitary for people this age.

In North Carolina, there are several levels of solitary confinement, all of which involve being locked in an extremely small cell for 22-24 hours a day, with little to no human contact and no natural light. People in solitary confinement live in either glaring florescent light or unbearable darkness behind a steel door. They have an uncovered toilet that also serves as a sink next to a single bed and a metal desk, all bolted to concrete. They eat in these cells with food passed through a slot in the steel door. Showers and exercise are restricted, and they are allowed few, if any, visitors.

As the Task Force report describes, “this confinement comes at the cost of great mental and emotional harm.”  Numerous studies and data demonstrate “it is ‘toxic to brain functioning,’ and causes harm that manifests as panic attacks, paranoia, perceptual distortions, and problems with impulse control

These negative effects are intensified in young people 18 to 21-years-old, because their brains are still developing. Being exposed to solitary confinement, even for a short time, causes permanent harm to their physical, psychological, and social growth and well-being.

Advances in neuroscience show that the human brain experiences significant development beyond adolescence and is not fully formed until people reach their mid-20s. Neuroscientists report that at age 18, people are only half-way through brain development[1] By age 25 or so, gray matter in the brain reduces, causing the reasoning and problem-solving centers of the brain to begin developing more fully.

Additionally, between the ages of 18 and 25, individuals respond to emotional stimuli differently than older adults; specifically, their reaction to negative stimuli, such as fear, is more emotional than logical. This is a function of the differences in the development of the prefrontal cortex, the area of the brain that controls executive functions such as emotional regulation, impulse control, planning and organization.”

Exposure to solitary confinement during this period of significant brain development causes increased psychological damage much more quickly than in older adults,[2] including anxiety, depression, paranoia, increased risk of self-harm and suicide.

Solitary confinement also creates educational setbacks, interferes with physical growth, and results in social and developmental harm, in part due to isolation from loved ones and lack of normal human contact. The experience of solitary confinement wreaks extensive damage on 18 to 21-year-olds and decreases the likelihood that they will ever be able to successfully reintegrate into the community.

As the Task Force and numerous studies and data show, solitary confinement leads to higher rates of recidivism following release, as well as increased risk of death within the first year of release due to suicide, homicide and drug overdoses, compared with people who did not experience solitary confinement.

Youth in prison and disability

Recognizing the particular danger that young people in isolation face, jurisdictions around the country have ended the use of solitary for juveniles, meaning those 17 and younger, including the NC Department of Public Safety (DPS). Yet, the NC DPS imposes the same policies, procedures and sanctions on everyone over 17, and, in fact, our examination reveals DPS treats these youthful adults more harshly than their older counterparts.

For example, in June of this year, about 9 percent of the entire NC prison population was in solitary confinement, compared with a shocking 20 percent of people in the 18 to 21-year-old range. Nearly 30 percent of those youth were in the harshest conditions of solitary, called “Control” status. This status is indeterminate in length and is usually initially issued for six months but can be re-authorized indefinitely regardless of whether the individual has broken a prison rule.

These findings are even more shocking when we consider that the majority of youth in prison have disabilities, a fact of which NC DPS is keenly aware. NC DPS Juvenile Justice reports that 98 percent of juveniles in the system carry at least one mental health diagnosis with 48% having at least one substance use diagnosis. Ninety-three percent have more than one mental health disorder. It is well-established that the brain is continuing to develop through age 24, and mental health disabilities do not disappear at age 18. Solitary confinement is just as devastating to these young people as it is for juveniles.

NC DPS knows of the harm of solitary confinement to 18 to 21-year-olds. In 2015 the DPS Mental Health Task Force recognized this when it recommended that people under 21 receiving mental health services not be in solitary confinement for more than 24 hours without the authorization of the Director of Prisons (Recommendation 2.5). However, DPS did not adopt this recommendation.

Racial disparities for youth in solitary

We showed in our last installment how DPS uses solitary disproportionately against Black incarcerated people. Our review of DPS data shows the same is true for incarcerated people 18-21. In June 2021, 70 percent of the 18 to 21-year-olds in solitary confinement in were Black. In the most restrictive use of solitary, 64 percent were Black. This is entirely unacceptable and in sharp contrast with the overall the racial makeup of NC’s prisons, which is 40 percent white and 51 percent Black.

18 to 21-year-olds in restrictive housing by race 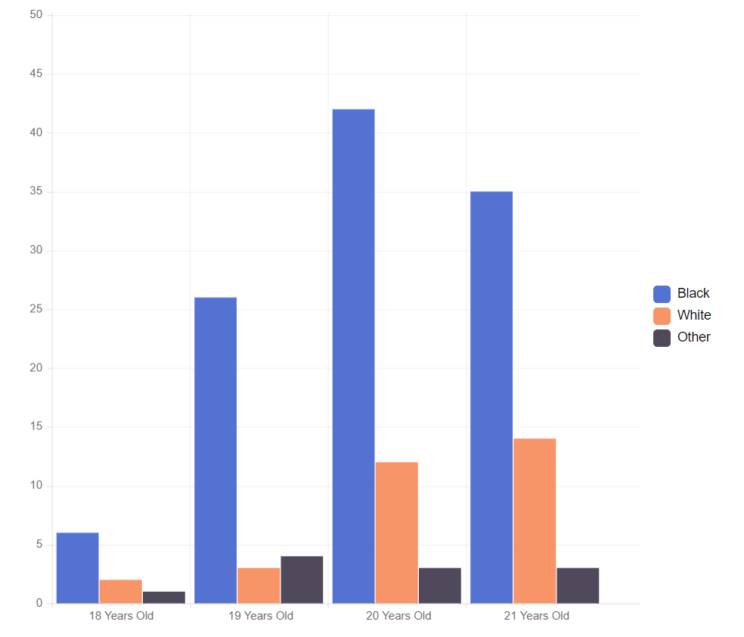 NC must stop this barbaric practice

Ninety-eight percent of people in prisons will return to our communities. It is time for NC DPS modify their policies so youth 18 to 21 are not treated the same as adults when it comes to solitary confinement. More care must be exercised to protect youth from the lifelong trauma created by months and even years in solitary confinement. Its use primarily on people in this age group who are Black must end.

Incarcerated youth in solitary confinement are prohibited from accessing rehabilitative services necessary to develop skills they need to successfully transition into the community. Solitary prevents youth from this important opportunity for development. This failure to provide supportive rehabilitative services is a disservice to everyone – those in prison, those working in prison and to our communities.

It is time to move away from this barbaric treatment of youth so we can create safer prisons and communities. NC must end the use of solitary confinement for youth in prison.

More than 130 years ago, the US Supreme Court denounced solitary confinement for producing no positive results and instead causing people to fall into “a semi-fatuous condition,” “become violently insane,” or commit suicide.[3] Yet even though we have known of its great harm for over a century and have a deepened understanding of its dangers, we continue this inhumane practice today. There is advancing consensus, including among prison administrators, that solitary confinement is counter-productive and does nothing to make prisons safer for anyone – those in prison, those who work in prisons and our communities that welcome people home from prison.

DRNC asks you to join our advocacy work around this critical issue.

View our previous posts and learn more about our campaign to Stop Torture in NC Prisons. There, you can also sign up to receive news and alerts from the campaign.

[3] “Solitary confinement as a punishment for crime has a very interesting history of its own in almost all countries where imprisonment is one of the means of punishment. In a very exhaustive article on this subject in the American Encyclopedia, Volume XIII, under the word “Prison,” this history is given. In that article it is said that the first plan adopted, when public attention was called to the evils of congregating persons in masses without employment, was the solitary prison connected with the Hospital San Michele at Rome in 1703, but little known prior to the experiment in Walnut Street Penitentiary in Philadelphia in 1787. The peculiarities of this system were the complete isolation of the prisoner from all human society, and his confinement in a cell of considerable size, so arranged that he had no direct intercourse with or sight of any human being and no employment or instruction. Other prisons on the same plan, which were less liberal in the size of their cells and the perfection of their appliances, were erected in Massachusetts, New Jersey, Maryland, and some of the other states. But experience demonstrated that there were serious objections to it. A considerable number of the prisoners fell, after even a short confinement, into a semi-fatuous condition, from which it was next to impossible to arouse them, and others became violently insane; others still committed suicide, while those who stood the ordeal better were not generally reformed, and in most cases did not recover sufficient mental activity to be of any subsequent service to the community. It became evident that some changes must be made in the system, and the separate system was originated by the Philadelphia Society for Ameliorating the Miseries of Public Prisons, founded in 1787.” Excerpted from In Re Medley, 134 US 160 (1890).